As a collective, one of the first things we asked ourselves was, almost obviously, “what defines socially engaged craft? Or art?” and this was quickly followed up by the most common second question, “does performance count?”

As philosophies and practices, social engagement (practice, SEA, whatever you choose to call it) and performance have similar histories in both art and craft discourses. These lineages are, perhaps, most easily accessed through avant-garde histories, although recent craft history and criticism on both performance and social engagement work tirelessly to lessen this gap.

In Claire Bishop’s “Artificial Hells: Participatory Art and the Politics of Spectatorship,” histories of both performance and sociality (what Bishop terms ‘participatory art’) intermingle, as Bishop traces the emergence of both through the historic avant-garde. She begins with the Italian Futurist serate (‘evening parties’), where artists like Umberto Boccioni would partake in brief, public actions, often involving audience participation. These actions were inherently political, challenging the status quo in both their content and mere existence within art discourse. These actions encourage not only participation but presentness and temporal shifts. Unlike most public works, these performances weren’t sculptural, static, or monumental, but fleeting, transient, and often violent in their fervor.

Likewise, early socially engaged art was fueled by politics and theatricality. Constructivist art centered on the idea that creativity was inherently social, and therefore deserved to be directed at social aims, seeking to make art that was informed by labor, domesticity, and public life. The subsequent decades of performance and socially based practice informed one another, as performance incorporated more and more participation, and the creation of social art became increasingly collectivized, communal, and ethical in its aims.

Nicholas Bourriaud’s 2002 text, “Relational Aesthetics,” examined the emergence of a particular hybrid of performance and socially engaged work, driven by artists like Rirkrit Travanija and Philippe Parreno in the 1990s. Bourriaud asserts that this kind of work takes “as its theoretical horizon the realm of human interactions and its social context, rather than the assertion of an independent and private symbolic space” and “points to a radical upheaval of the aesthetic, cultural, and political goals introduced by modern art.” In opposition to earlier works, which often depended on the symbols, signs, and philosophies of “high Art,” modernism, and bourgious elitism, these works dealt specifically with the interactions between those participants present, aesthetically “framing” a relational experience. This is arguably socially engaged art’s “purest form,” – works that “tighten the space of social relation[s]” and address and (in)form the bond between participants. 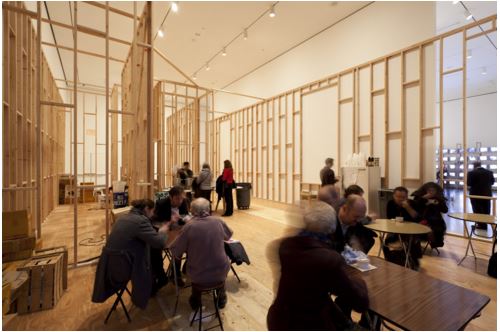 Rather than consider relational aesthetics to be a “kind” of artistic practice, let’s examine it as the aesthetic frame for practices that deal in the social sphere. In this way, both performative and socially engaged practices can be relational, and often strive to strengthen or complicate the social bond between participants.

Let’s turn to craft, shall we? It’s important to note that the aforementioned ideas have a lineage in Western, art discourse, but are certainly non-unique in this context. The craft object encourages sociability, connection, and discourse in its very existence, and this is true the world over. To consider social practice, or performance, to be products of the Western avant-garde is misleading, elitist, and ignores the wealth and development in visual and material cultures around the world.

The craft object, in its traditional forms, is often domestic, functional, and personal, carrying with it a sense of its maker’s skill and tacit knowledge. My background is in ceramics, so I’m going to use the idea of a bowl to briefly explore the social and performative potential of a craft object before moving to the wider, socially engaged contemporary practice.

A handmade bowl is inherently dialectical, encouraging exchange between maker and user. A crafted object carries with it signs of process, whether it’s throw lines, thumb prints in glazes, a specifically trimmed foot, or a stamped signature. The process of a craft object can be considered performative, particularly when we consider the long history of demonstrations in craft as a way to teach, learn, and pass on tacit information. The object itself addresses performance in two ways. First, it is an artifact of the performance of making, leaving traces and marks of the maker in its form. A user can inherently understand part of the process and performance of maker by touching an object, feeling the throwlines, and contemplating the maker’s decisions. Secondly, the use of such objects is performative, as subjects wield objects for specific purposes, even in the simple instance of eating a meal.

Furthermore, craft objects encourage sociability. First, in their relation between maker and user, even if the two never meet. Secondly, as craft objects often have use, these uses often take place in a social space, whether its public (as in the case of tile murals, yarn bombing, etc) or private (in the sharing of domestic space or a meal).

Socially Engaged Craft, as a practice, project, or philosophy, takes on both the performativity and sociality of craft, expanding it beyond the craft object itself, into more relational spheres of public engagement, activism, and yes, performance.

But there must be some line, right? There must be a line between what is performative craft and what is socially engaged. Not only is it important to see if performance can be social practice, but if it should, considering what is critically at stake between these two discourses.

A performance demands an audience, and therefore, some kind of social relation takes place there. Within social practice, however, we are urged to consider not only the aesthetics of our work, but the ethics.

This, I think, is a fruitful ground for exploring the relationship between the two. Pablo Helguera, in his text, “Education for Socially Engaged Art: A Materials and Techniques Handbook,” points to the importance of planning, consideration, flexibility, and reflexiveness in socially engaged practice, on the whole, ethical behaviours on the part of the artist/maker. Here, the public (or the social participants) are considered beyond the role of mere spectator, as collaborators and participants, capable of meaningful connection, disagreement, and idea generation. While performance artists can consider these things (in terms of audiences), it’s not necessitated by the practice.

A performance that would meet the conditions of “socially engaged” necessitates a willing and participatory public that engages with the maker/artist in a series of social intra-actions, such as dialogue, touch, affect, or direct participation. These intra-actions form a social bond informed by (ideally) ethical behaviours of the maker/artist, who considers the participants as much as themselves or their produced objects. Social practice, as articulated by Helguera and supported by a desire to increase the social bond, considers the ethics and positionaliy of the aforementioned participatory public, acting and reacting in real time.

This is where it can complicated, as performance is often archived as video work, and social practice is possible without the artist/maker present. This is where we must be flexible, as a collective, as critics and historians, as makers. The connection between disparate selves is possible without physical connection, and the exchange of ideas, the dialogue, can be delayed, non-verbal, and disjointed. It’s certainly possible to create connection and change through objects, as makers such as Ehren Tool, and (SECC members) Michael J. Strand, and Jeni Hansen Gard show us. Sometimes these projects have a performative or sociable element, and other times, the maker is not present, and the objects communicate and facilitate connection on their own.

Socially engaged craft demands a constant rethinking and repositioning around its ethics and aesthetics, as our discipline constantly moves and shifts. New ways of working, new kinds of objects are at the forefront of our field, and the social role of craft is in flux.

Let’s get this conversation going! Do you agree? Disagree? Find more connection or dissonance between social engagement and performance?

2 responses to The Role of Performance in Socially Engaged Craft (and Art!)