Socially Engaged Craft (SEC) is the materiality of an idea realized in objects as well as conversation. It cannot exist without the tangible, but is rooted in the conceptual.

There is much to the equation of defining SEC that needs spelling out in order to define what exactly practitioners of SEC are trying to “solve”. This is an attempt to give some formula to the work of SEC artists done with the knowledge that it will be broken, expanded upon, and challenged as is the nature of aesthetic activism.

Much of contemporary work is aligned with the title of SEC because of its unique equation of object+concept+activism. It emerges from the terminology and traditions of Socially Engaged Art (SEA) particularly in its roots in Conceptual Art. In this shared conceptual history conceptual practice a common, though nebulous, narrative emerges to provide a definition of Socially Engaged Craft.

Many Socially Engaged Craft practitioners, as the artist/maker, are the authors of an idea but relinquish the process of fabricating the art/craft product to the participants, or at least include participant contributions as essential to the piece (ie. Aaron McIntosh’s Invasive, Michael Strand’s Ex.Change: My Time for Your Time,  or Ehren Tool’s Production or Destruction exhibition).

In this way the idea-based methodology of Socially Engaged Craft has roots in Conceptual Art (ie. Sol Lewitt Sentences on Conceptual Art). In Conceptual Art the artist may or may not be present and extends their role as maker to include the making of an idea. This is the jumping off point for much of contemporary work that favors idea as product over material as product. In line with SEC, SEA includes materials as departure points for dialogue, however, the process of making or interacting with an object is not an inherent part of SEA as it is in SEC.

For example, in Fran Ilich’s Diego De La Vega Coffee Coop, does not make coffee with participants, rather, the artist “makes” connections (in this case, connections based on the humanitarian concerns within coffee production) through the conversations they have with people while having a cup of coffee. The whole project hinges on an idea produced by the artist, not through an idea represented through an object the artists or participants made/interact with.

In contrast, SEC asks that people engage on a level of making with the artist, or become involved in a crafted object on an active level. This active level of interaction draws scholar Glenn Adamson’s definition of craft as a verb. For SEC, using the verb “craft” is the means by which material/activist/social connections are made.

SEC, unlike SEA, cannot exist as wholly concept. SEA can exist as an interaction that is not materially based. SEC needs material (and more importantly material that is defined by the maker as “craft”) to prove its point. Socially Engaged Craft exists to raise consciousness through interaction with an object.

For example, Aaron McIntosh’s Invasive (a project wherein participants create a fabric vine of “queer kudzu” to promote LGBTQIAA visibility in the south) could potentially exist solely as a conversational piece. However, removing the making process from the project would no longer implicate the making as a subversive act. The making in Invasive is what brings participants to the conversation and allows them to contribute to the piece. There are many other SEC projects where the making is the essential point of connection for the piece to be realized, as making is core to notions of craft. 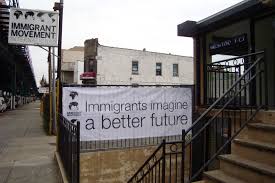 In comparison, many Socially Engaged Art pieces can exist without explicit materials. Take, for example, Tania Brugera’s Immigrant Movement International wherein the artist created a location and a movement that as of yet has no traditional art object acting as its representative, but instead hosts events, pushes advocacy agendas, and acts as a safe space for community members. This non-material work is rooted in Conceptual Art, art which is not tied to object but can exist solely as an idea that the artist creates. Conceptual Art=Idea=Art.

Shannon Hebert Waldman is a recent graduate of Warren Wilson College in her hometown of Asheville, North Carolina. She spent her time in the mountains as an Integrative Studies Major investigating how art is used as a tool for social justice. Her studies culminated in a thesis “Naming Socially Engaged Craft,” which focused largely on the Socially Engaged Craft Collective. She is the first Art History major to have graduated from WWC and is using her degree in her positions as archivist and studio assistant at Mel Chin’s Studio as well as at several galleries in Asheville. You can keep up with Shannon’s work as an aspiring art/craft/social justice know it all at https://directdisorder.wordpress.com.